I was talking to a client about how to increase profits dramatically.

“Well, I don’t want to be greedy and make too much.”

I didn’t get an answer. I never do. I know that some people (hopefully a small minority) are put off by my constant emphasis on making money. I know that because, as a business coach, I have talked with hundreds of small business owners about profit and have often had conversations like the one above.  It’s as if the speakers feel guilty about making a profit or that it is somehow noble to loathe money.

I believe most of the comments and feelings were sincere, but they were misguided.  They were misguided because that sort of thinking can do great damage not only to their businesses, but also to the wellbeing of others. Great damage that is precisely the opposite of intended virtue.

Profit is not just a good thing, it is a moral imperative.

It is your duty to yourself and to others to make all the money you can without coercion, lying, cheating or stealing.

I’ll say that again so I don’t have to repeat it in every section below - without coercion, lying, cheating or stealing.

The graphic below outlines the facts on profit we will be covering in this article. 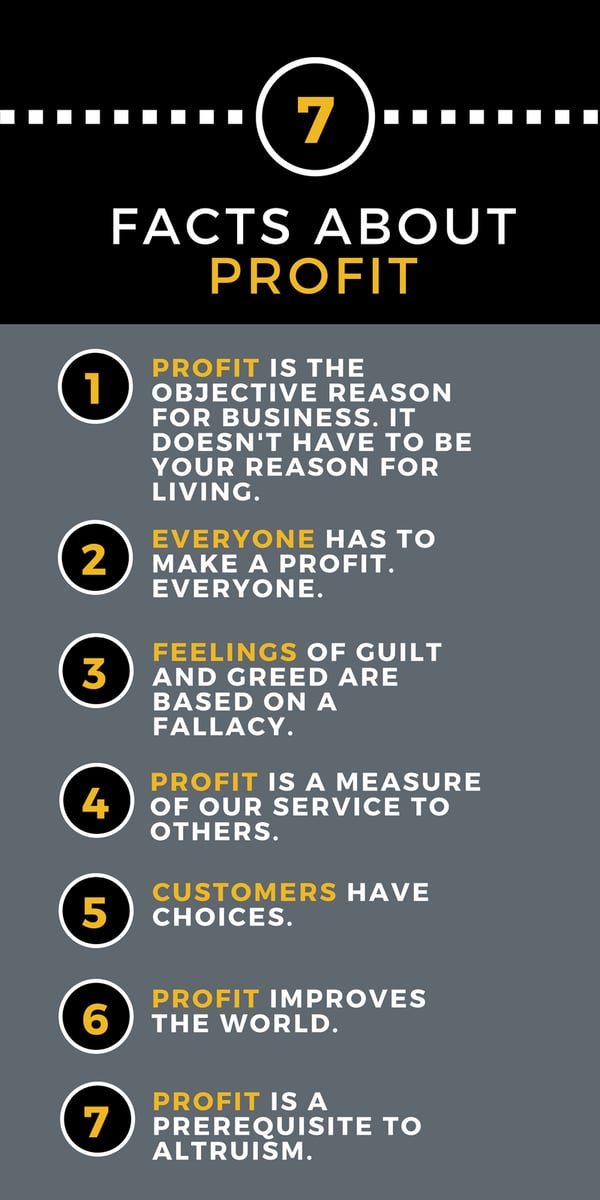 Earning profit is the objective reason for being in business.  How to use the profits is (or should be) up to the person who earned them. We can give them away if we want to. Profit makes it possible to stay in business and to continue to serve through the means we will look at below.

Everybody makes a profit, even those who denounce it loudly.  We all know that intuitively, if not explicitly, and we all behave accordingly. If we earn less at our jobs than it cost us to get there, we stop going to work even if we want to. We have to recover our costs in order to pay our way to work, and we have to make a profit to support ourselves outside of work. The same applies to those who don’t work but are paid anyway. If it cost us more to pick up a government, retirement or inheritance check than the check is worth, we won’t bother to do it.  Everybody who is capable must make a profit.  Everybody.  The alternative is charity, which is to live off of somebody else’s profit.  What’s noble about that?

The word greed conjures up echoes of a common fallacy.  The fixed-pie fallacy is the idea that if someone has money, someone else has to do without.  The supply of money, wealth and profit does not come from a fixed pie, but rather from an infinite source. The evidence is everywhere around us, and will be the subject of a future article. The fact that we earn a profit does not hinder another person’s ability also to make a profit.

Profit is a measure of how much our contributions exceed our consumption. A man who earns large profits, whatever his motives, cannot do so without benefiting others far more than himself. This is true because everybody’s expense is somebody else’s income. Let me explain.

The average business in the US makes a profit, before taxes, of around 7% of sales, but we’ll use 10% to make the math easier. That means that 90￠ of each sales dollar goes to pay expenses, all of which are income to someone else, such as a supplier. The same is true for the supplier’s business, 90￠of what is paid to the supplier becomes his expense and somebody else’s income. This cycle of so-called “economic impact” continues until it eventually dampens out at five to ten times the original 90￠. That means that in order to generate his 10￠ profit, the original businessman created about $4.50, or forty-five times more, income for other people.  If you truly want to benefit the world, go make money!

All of that is before considering that the government takes a nickel from everybody’s dime. Taxes mean the original businessman generated the $4.50 in pursuit of only 5￠, which means he in fact benefits others 90 times more than himself!

Businesses that make “too much money” attract competition. Competition drives down prices and increases innovation, options, quality, and availability of product. In fact, keeping prices artificially low to defend against competition is in many situations against the law! Competitive innovation also forces obsolescence which directs resources to new, more productive and valuable uses.

Finally (finally for this discussion anyway), if we don’t make it, we can’t give it away. Whatever our subjective motives for being in business, we have no capacity to fulfill them unless we make a profit. Even the most altruistic among us must do well in order to do good.

How about you? Have you felt twinges of guilt or uncertainty about the morality of profit? If not, have you ever had to defend the idea of profit? Did this article help? I’d like to hear your thoughts and reactions in the comment box below.

How to Talk to Prospective Investors

How to Make Time to Manage Your Time