I had been working with Casey, a contractor, for two months when we finally got his bookkeeping squared away. His income statement showed that he was making a lot of sales and doing a lot of work, but he wasn’t making much money. Certainly not enough to justify the effort and risk of running a business. We set out to fix that.

Casey’s overhead is reasonable for a company his size, so I suspected he was pricing his bids too low. There are four common reasons for that:

It turns out that Casey was having trouble with all four.

No Target Margin For Bids

Casey was bidding jobs without a target gross profit margin in mind. There was no apparent method to his pricing. He had no plan for breaking even or earning a reasonable net profit.  If he felt confident, he bid high (but never high enough). If he felt insecure, he bid low.

Every business has a limited capacity to do work. You simply can’t do enough underpriced work to pay your overhead expenses and make a profit. That means you have to know your capacity and know how to properly price jobs. Otherwise you’ll exhaust yourself swapping dollars among your customers, suppliers, and employees.

Casey and I settled on a target margin of 40% which would give him a good shot at paying his overhead and earning a net profit of at least 10% of sales.

It seems as if it would be easy to tell the difference between cost - the amount you pay for goods and services - and price - the amount you charge your customers. It’s not. Almost every contractor I know has trouble with it, and Casey was no exception. I asked him to send me his cost estimates for a job he was bidding. He sent me a worksheet containing a long list of items with a dollar amount next to each one. Among them were:

I asked Casey how much it cost to pressure test lines.

“I don’t pay anything. It just takes about an hour of my time.”

“No material or hired labor?”

”That’s what I charge to pressure test a line.”

“So that’s your price, not your cost.”

I asked the same question about every item on full list. About half the numbers were prices and half were cost. In the abbreviated list above, the $4,000 of labor was a price. He estimated that his actual labor cost would be $2,200. Concrete, rebar, and dumpster rental were listed at actual cost. The net result of mixing cost and price was that his “cost” estimate was about $5,000 higher than actual cost.

The danger in overestimating actual cost is that once you begin to bid with proper margins you might overprice your bid and lose worthwhile jobs. You cannot accurately price a bid with a target margin until you know what your actual costs are.

The last item on the worksheet was labeled, “Contractor fee - 20%.”

“Is that something you have to pay to a sub-contractor?”

"You can see why it would be very hard to know just how much money he might make on his bid."

In an attempt to earn “20% on this job,” Casey had multiplied his total “cost” by 20% then added it to the total to come up with a price for the customer. As a result, he was marking up the cost items AND marking up the markup on the price items. You can see why it would be very hard to know how much money he might make on his bid. 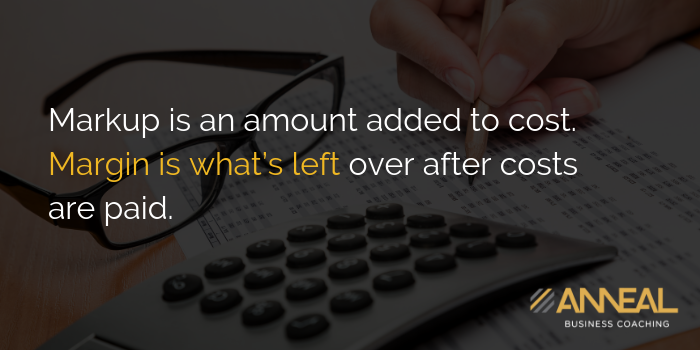 Casey had planned to bid the job for $22,000, the total of his markup plus actual and overestimated cost items.

Casey’s eyes got big when he saw the number. “They’ll never go for it,” he said.

“How do you know? You haven’t shown it to them.”

“Because it’s a lot of money.”

Maybe so, but more likely that sort of thinking was the result of Casey’s lack of confidence.

“Do you want to keep working your tail off for nothing?” I countered.

The customers told Casey that they were "...getting seven bids," which added to the pressure, but, to his credit, Casey mustered the courage to bid the job for $25,000.

I found out  just days before publishing this article: Casey got the job. When he called to tell me, he added "...and they didn't even argue about the price!" This was a win all the way around. The customer will get a great job from a contractor who can afford to do it right; Casey got an extra $3,000 and a tremendous boost in confidence;  I got a great case study to make my point about bidding jobs.

This bid worked out well for Casey and my article, but you will not always win bids priced at good margins. That's because you will bid against contractors who don't know their costs and bid the way you used to bid. However, you owe it to yourself bid with appropriate margins. Otherwise you're just kidding yourself and have no chance to earn your target net profit. (Visit my website at www.annealbc.com and download the breakeven calculator. It will show you how much less you have to sell at higher prices and how much more you have to sell at lower prices to hit and maintain a target profit. You will be surprised.)

Raising prices is almost always frightening. It takes confidence or at least courage to overcome the fear of going broke for lack of work. That’s not going to happen, but if it did, it would be better to go broke from lack of work than to go broke working your tail off on underpriced jobs.  Bid jobs at a price that gives you a chance to succeed. Bid jobs like you mean business.

"Bid jobs at a price that gives you a chance to succeed."

If you would like further help with target margins and bidding, watch for my upcoming workshops and webinars, or email me and we can set a time to talk.