The lady had something she wanted me to see, and it was urgent. When she arrived at my office, she handed me a letter without saying a word.

“Based on my calculations and the documents you provided, I am assessing a penalty for 1,134 days. The maximum penalty for non-compliance is $1,000 per day which would be $1,134,000. Because you are in compliance at this time, I am willing to offer a reduced amount at 4%, which would be $45,360. Please return your payment in the enclosed envelope.”

This kind and hard-working lady had taken the advice of an insurance guy who told her how to save money on workmans' comp insurance. He was wrong, and it cost her $45,360. SURPRISE!

A local business owner decided his company qualified as a farming operation and therefore he didn’t have to pay overtime. A disgruntled employee and the fair labor practices board decided otherwise. This man took his own advice. He was wrong, and it cost him $21,000 in penalties and back pay. SURPRISE!

Another business owner figured it would be much easier to pay his team as 1099 contractors rather than employees. That way he could just write checks to his people. Simple. No more payroll service, payroll deductions, and payroll reports, and no more state and federal tax deposits. As an extra bonus, he saved the 9% FICA matching tax he had to pay on total payroll. He had asked around, and “everybody” in his line of work did it that way. He took “everyone’s” advice. Everyone was wrong. He doesn’t know the final tally, but he now knows that the penalties for misclassifying employees as contractors are: $50 for each W-2 not filed; 1.5% of the total wages paid; 40% of the employees’ FICA taxes; 100% of the FICA tax match; and a 0.5% penalty for the unpaid tax liability each month up to 25% of the total tax liability. His case is unresolved, but total penalties and taxes could easily surpass $100,000.  SURPRISE!

An acquaintance of mine formed a company to pursue a new business opportunity. In order to save money, he downloaded an LLC operating agreement from an online site that promised to save him thousands of dollars in legal fees. He is currently involved in a dispute with a partner about who was supposed to contribute how much money to the company. My acquaintance took the advice of a website. It was wrong, and the dispute has so far cost him about $15,000 in legal fees. SURPRISE !

A friend of mine owns a marketing company in Dallas, Texas, where, through a series of convoluted rules, the state charges sales taxes on some services but not on others. My friend thought he had the rules figured out. An auditor for Texas Comptroller’s Office thought differently, and it cost him $19,000 in taxes and penalties. SURPRISE! 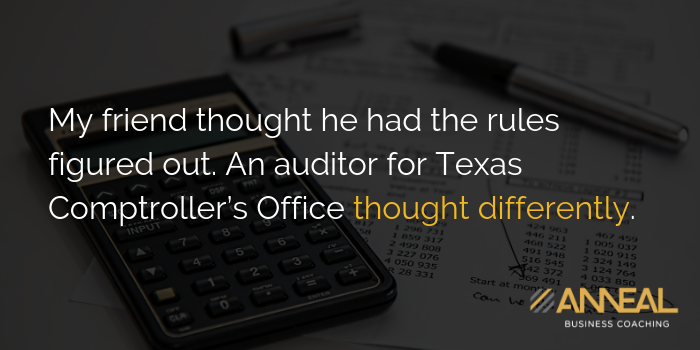 A subcontractor working for a large general contractor didn’t understand the full meaning of the word “inferred” as it was used in his construction contract. It turns out the word meant he was obliged to build not only what appeared on the architect's drawings, but also what the architect might reasonably have been thinking when he drew them. The subcontractor didn’t fully appreciate the language in his contract. He appreciates it now after doing $50,000 of unpaid work. SURPRISE!

I can go on and on with examples of companies that were surprised by insurance, tax rules, HR, IT, and banking issues. But you get the point. You are likely very good at what you do, but you are not likely to be an expert in all the critical areas that impact your business. Misjudgments in those areas result in surprises. Some can be annoying, some can be painful, and some can be catastrophic.

Don’t take the advice of “everyone,” or a website, or some “guy,” even if that guy is you. Surround yourself with competent professionals, at the very minimum a CPA, attorney, insurance agent, a banker, and HR and IT professionals. Spend the money. Use them. 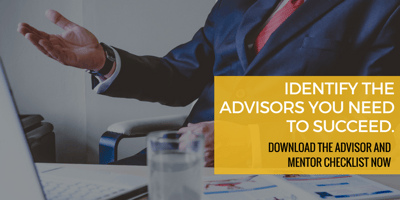