How to Steal Money and (Almost) Get Away With It

Several months ago I wrote an article titled How to Prevent Embezzlement from Ruining Lives. I mentioned in the article that a long-time, trusted employee (my bookkeeper) had embezzled $340,000 from the company I ran at the time. I described many of the common methods thieves use to steal, but I didn’t describe the specific method my bookkeeper used. I’m doing it now, first because the knowledge may save you a lot of money and pain, and second, because these scams are always interesting. (Whenever I mention embezzlement, people always want to know how “they” did it.)

My company had a large number of credit cards issued to company officers and sales people. All of the cards were issued by the same credit card company.

We made a lot of purchases on the cards, which meant that we had to pay down the balances several times per month. My bookkeeper paid the cards on the credit card website using Automated Clearing House (ACH) payments. It just so happened that she had a card issued by the same bank, and she simply paid her credit card along with ours. 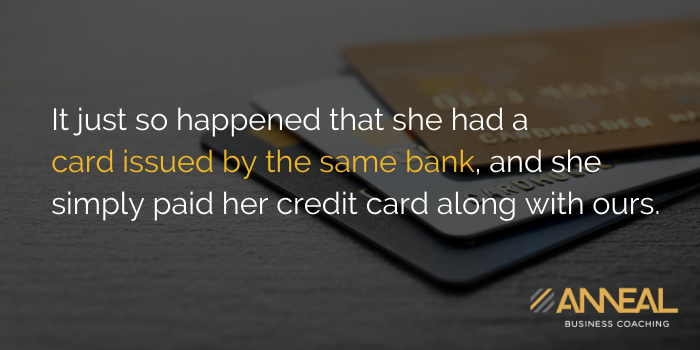 Our month-end bank statements showed a lot of payments to the same credit card company, and all of them showed up as payments to:

The only way to tell the difference between our cards and hers was to look at the last four digits of the card number. That wouldn’t have been hard to do, but I didn’t often look at the bank statements, and when I did, I didn't pay any attention to the card numbers.

Okay, so that’s how she did it. But how did she (almost) get away with it?

When you take money from your bank, you have to enter the withdrawal in your bookkeeping software, otherwise your books won’t reconcile with your bank account. However, once you enter a withdrawal in your books, you also have to record where the money went, otherwise the software won’t record the transaction. That was a problem—where could she record the expense so I wouldn’t notice?

But that’s not the end of it.

Recording a transaction in last year’s books presented her with another problem. Adding a transaction to a prior year changes the year-end balance of an account called retained earnings (near the very bottom of your balance sheet). Most of us don’t look at that number, but accountants do. In particular, they check the number at tax time to see if the current amount is the same as the amount shown on last year’s tax return. Accountants would be immediately suspicious if the numbers were different. She solved that problem every December by changing the transactions back to the current year. After she moved them back, I didn’t notice the stolen amounts because they were scattered throughout a year’s worth of business.

I doubt that I would have discovered the theft if we hadn’t sold the business. To make a forecast of payouts to our investors, I had to dig into the books. That’s when I noticed faint pencil scribblings in the margins of our printed bank statements. She had made the notes so that she could find her antedated entries and change them back at the end of the year. I started asking questions, and she finally admitted what she had been doing. 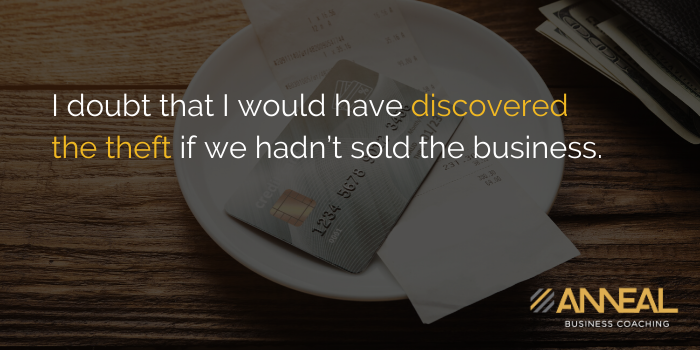 That whole scheme appears pretty sophisticated, but any good bookkeeper with a little cunning and sufficient incentive could do it. So what could I have done to prevent the theft?

I could have paid more attention. I should not have simply trusted that embezzlement wouldn’t happen to me.  (My experience has shown that the victims of embezzlement are shocked to the point of disbelief when they discover it.)

I could have trusted my instincts. Looking back, there were many times the bank balance didn’t reconcile with my mental math. You know what I mean by mental math - it’s that running tally you keep in your head about what comes in and what goes out and how much should be left over. Many times it just seemed to me that we should have had more money in the bank than we did. Turns out my instincts were right, but I never acted on them.

I could have password protected prior year entries. Most software has a setting that requires a password in order to make entries into a prior year. This feature might have frustrated my bookkeeper’s scheme, except it wouldn’t have because she had all the passwords. 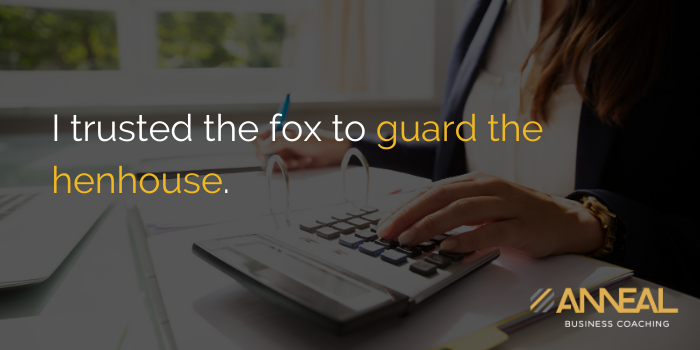 Although the explanation is a little tedious for this short article, there is another method that will spot prior year entries, even if they were made with the permission of passwords. Email me, and I will send you the steps to implement the method.

I am writing this article about two weeks after a client of mine caught an employee stealing from his company. The thief had worked for the company for more than 25 years, and everyone thought of her as “family.” Evidently, she thought differently because we found proof that she had been stealing from them for many years. Talk to your outside accountant about how to guard against embezzlement. If you think it can’t happen to you, it probably already has.