Small Business and The Virus

In his book The Wealth of Nations, Adam Smith said: “All money is a matter of belief.” We must believe money has value in order for it to actually have value. When belief, or confidence, wanes, so does the value of money and the wealth it measures. In 2008, over two trillion dollars in value evaporated from real estate due to a lack of confidence in financial markets, even though actual properties had not been diminished by so much as a single brick. We’ve seen a similar decline in the U.S. stock market over the past few weeks due to a crisis in confidence brought on by the Coronavirus. We recovered from the crisis in 2008 and we will recover from this one.

The Coronavirus has had and will have a direct, severe, and sad impact on a very small percentage of us. It’s had a much greater impact on the majority of us through its effect on our confidence. We can blame the virus, but it is we - you, me, and our neighbors - who will determine how much damage it does to our economy.

The virus spread by infecting one person which became two people, then four, then eight, and ultimately a pandemic. There is no vaccine for the virus, but there is a remedy for economic ills, and that is to beat the virus at its own game. One of us behaving confidently, becomes two behaving confidently, then four, then eight, and ultimately millions, at which point the economic crisis is resolved.

So what does it mean to behave confidently?

It means don’t panic, don’t deny the problem, and don’t do stupid stuff. I don’t need to repeat the advice of health care professionals. (Those who are unaware of hand-washing and social distancing, and who are unwilling to educate themselves, deserve to have their genes harvested from the gene pool by this or some future crisis because they put others at risk.)

It means buying one roll of toilet paper, and making sure other people see us do it.

It means calmly assessing the risks to our businesses - cash, employee attendance, sales, and supply chains (Did I mention cash?) and developing a near-term plan for each. Preserving cash does not mean hoarding. It means continuing with prudent purchases and payments. (Now is a good time to implement those crazy revenue-generating or cost-saving ideas we've cooked up because, well, because what the hell?) 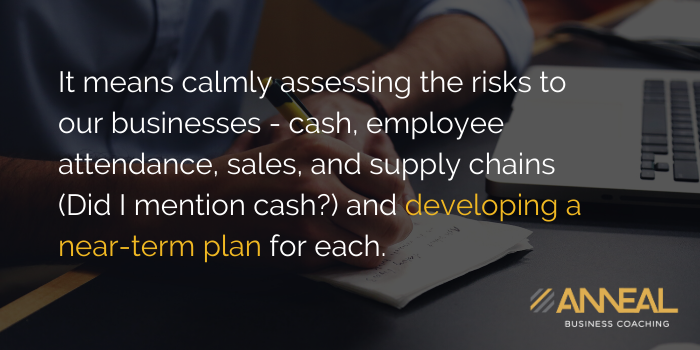 It means recognizing that uncertainty has always been with us - we just happen to know about this one.

It means continuing to participate in the economy - buying from suppliers, selling to customers, paying employees, and finding new ways to communicate and work with them all. Maybe we can’t continue at a pre-virus pace, but we can certainly do more than nothing.

It means recognizing that low sales and low margins are better than no sales and no margins. If you still have positive gross profit margins and can possibly stay open, do it. You will lose less than if you close the doors. 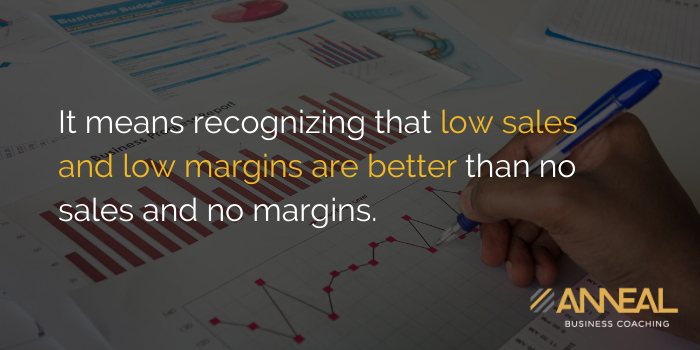 It means asking our suppliers, landlords and banks to accept reduced payments for the next several months.

It means devoting our minds to working around problems rather than dwelling on negative “what-if” thinking.

It means using available time to learn, or to create systems, or to make changes we have been too busy to make.

It means collaborating with our peers, our customers, our suppliers, our advisors and even our competitors. It means sharing ideas and solutions, and bolstering each other’s confidence through community (via Zoom, of course) and action. 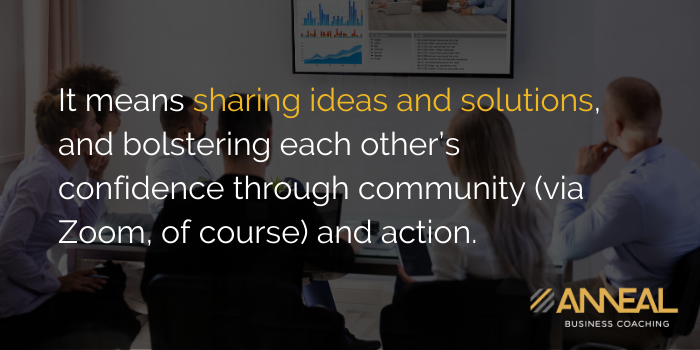 It means paying attention and recording the ways we “wish” we had prepared for this crisis, so we will be better prepared for the next. (If you don’t know how to prepare for an abstract future crisis, think “written systems” and “cash.”  Whatever the future holds, we and our teams are better equipped to confront it with established systems and a cash reserve .)

It means acknowledging and thanking those around us who were prepared and, by their preparation, helped mitigate the crisis for all of us.

This individual-responsibility approach to a crisis is leadership, and it’s a lot like voting. Our one vote out of millions doesn’t seem to matter, but we all know it does.  The virus began with one person, and the solution can too. We have to believe and behave confidently.