How Much Does it Cost? - Burdening, Cost Absorption, & Other Tomfoolery

“How much does it cost?”

Such a simple question. At least it is if you have a receipt in your bag from the store where you bought “it.”

For those of us who bid jobs or price manufactured products, cost can be one of the most confounding issues in business.

My experience has shown that a majority of us are (very) confused about issues of cost and price. Cost and price are related because most of us use some multiple of cost to price bids and products (more about that later).

The confusion sets in when we allocate a portion of overhead to individual products or services in an effort to find our “true” cost. The idea is that every product or service consumes some part of overhead and has to be charged for that amount.

The practice of allocating overhead to individual products and service is known as “burdening” or “cost absorption” and it leads to all sorts of confusion and bad decisions. It is a completely arbitrary and, therefore, meaningless exercise. 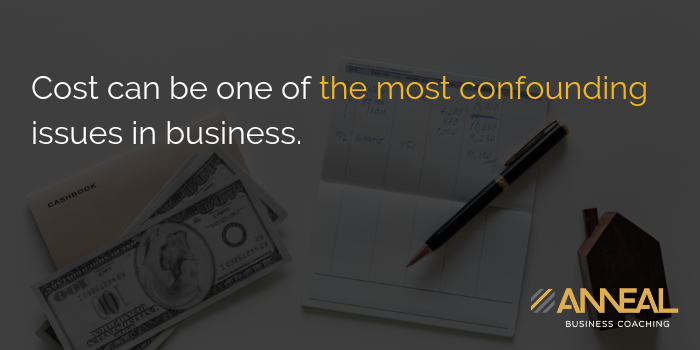 The Tomfoolery of Burdening & Cost Absorption

You may not recognize the terms burdening or cost absorption, but I’ll bet you’re familiar with the concept. Think back to a conversation you had about cost. If it’s been awhile since you've had a costing conversation, ask a colleague how much it costs, for example, to run a machine out in the plant. I doubt you will get a receipt-in-the-bag straight answer.

Rather than unravel that complicated answer, let's look at a simpler response I got from a former client who owns a west Texas manufacturing company.

His company manufactures a product line, but also does job-shop work on a bid basis. Customers request quotes for rebuilding or modifying machines and for building custom machines. This bid work is an important part of their business that accounts for 40% of their revenues.

In a conversation about pricing bids, I asked the owner about his labor costs. He told me his labor “cost” was $80 per hour.

Now understand that I had been in the company parking lot many times, and I had seen what the employees drove to work. I doubted that anyone made anywhere near $80 per hour, which is roughly $160,000 per year.

I modified my question and asked about the actual cost of labor, the out-of-pocket costs they wrote checks for, including hourly wages, insurance, other benefits and taxes. That total was $25 per hour.

In order, as the owner put it, “to make something to cover overhead,” management added an overhead charge of $55 to each labor hour as “burden.” No one could tell me the origin of the $55, but there it was, imbedded in what everyone in the company acknowledged as a labor “cost” of $80 per hour.

The problem at the company was that the $80 figure quickly became actual cost in their minds, replacing the real variable cost of $25 per hour.

That led to bad decisions.

The company not only lost work due to overpricing bids, but also routinely passed on work paying less than $80 per hour because they thought they would lose money.

I hope you recognize the fallacy in that logic. A job paying $75 per hour is not as nice as one paying $80 per hour, but would still contribute a $50 per hour margin toward paying overhead and profit.

The problem with that logic was that the company confused cost information - the $25 out-of-pocket, receipt-in-the-bag, I-wrote-a-check-for-it, actual labor cost - with a pricing decision - the $55 “burden.”

They added $55 to cost to create a margin, which is price. But Benco didn’t call it price, they called it cost.

It’s crazy. Their idea of true cost wasn’t true cost at all. It was a random number created out of thin air. It was a combination of variable costs and a number attributed to “overhead” arbitrarily thrown together and meaningless. It’s so convoluted that it’s hard to even write about.

I am treading on thin ice when I presume to explain why people burden their products and services, but I’ve seen enough of it to make an informed guess. As best I can tell it is because they want to be sure to set prices high enough to recover their costs. It’s as if increasing the so-called “cost” of products or service through burdening will somehow trick them or remind them to charge enough to recover their overhead.

Variable costs, then, are the costs of the product or service. Overhead is the cost of maintaining the capacity to produce. It is meaningless to divy overhead up and arbitrarily assign it to individual products or services.

“Okay,” you’re thinking, “I got it. Variable costs are the true cost of production, but I still have to pay overhead. Don’t I have to add those costs to the cost of my products in order to recover all my costs?”

Adding one cost to another does nothing at all to recover costs.

Overhead costs are not product costs and should be kept separate because they behave differently in relation to sales. I have written a half dozen articles showing the advantages of separating variable and overhead costs and how to use the separated costs as an aid for pricing and many other types of decisions.

Burdening just recombines them in an arbitrary fashion and messes everything up. 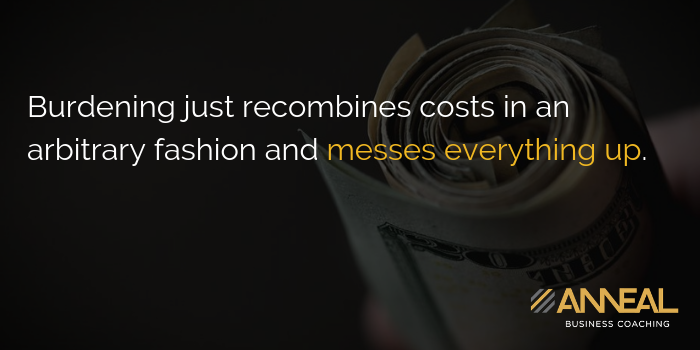 So how do we recover overhead costs if we don’t add them to the cost of our products and services?

We recover our overhead through margins, the difference between our selling price and our variable costs. If, after calculating breakeven, we determine that we need higher margins, the answer is not to increase our burden rate. It is to get prices up, get variable costs down, or both.

We don’t need an allocation of overhead to do any of those things.

Once the overhead is paid, our margins become profit. Where burdening creates confusion about cost and leads to bad decisions, margins lead to clear thinking and rational decisions.

The most common method of burdening is to distribute overhead costs across products or services based on sales volume. For example, if we expect to have $1 million in sales and $100,000 of overhead, we might add 10% of anticipated sales to the “cost” of every product or service as a burden to recover our overhead expenses.

That reasoning has a certain appeal to it, but it is bogus.

In the first place, we don’t need burden to raise our prices by 10%. We can just do it. Second, we don’t know what our future sales volume will be, therefore whatever burden percentage we choose, barring pure dumb luck, will be wrong. And third, the decision how to allocate overhead across individual products and services, evenly or otherwise, is arbitrary and a source of conflict in many companies. (If you don’t believe that, sit in on a meeting in which management tries to explain to product managers the annual burden they will be saddled with. You’ll hear a lot of: “It’s not fair!!”)

The entire exercise is an arbitrary and based on the predicted volume of sales and myriad other assumptions.

When we use the breakeven techniques we discussed in prior articles, we calculate how much we have to sell to breakeven or to make a budgeted profit.

When we burden our products or services with overhead, we have, consciously or not, predetermined what we will sell.

That is a presumption.

The first number is useful, the second one is not. In fact, although they base critical pricing decisions on them, most people who burden couldn’t tell you the presumptions on which they based their decisions.

Burdening would be a wasteful but benign exercise, except for the confusion it creates and the fact that it renders all the breakeven tools we have discussed in prior articles useless.

Without accurate variable and fixed costs, we can’t know our margins, and without margins, we can can’t find our breakeven, or determine the effects of price increases or discounts, or set efficiency targets or use any of the other tools that margins and breakeven make possible.

Cost does not have to be a confounding topic.

Separate variable and overhead costs, keep them separate and don’t participate in burdening.

Having said all that I have about the relationship between cost and price, I want to be sure I haven’t misled you.

I have been talking about using cost to determine price because that’s what most of us do. However, cost has little to do with purely rational pricing decisions, which are simple: Charge as much as the customer will pay, but not less than variable cost.

When it comes to charging customers all they will pay, cost shouldn’t determine price. To illustrate the disconnect between cost and price, imagine you found a diamond in the street. Would you sell it for pennies because your acquisition costs were low? On the other hand, suppose your guys messed up and you had to rework an entire job. Would you expect your client to pay double?

As for variable costs, we can’t sell for less than variable costs because if we do we will lose more money making a sale than not making it. If we charge more than variable costs, even if we don’t breakeven on total sales, we will at least earn a margin to help pay overhead and profit. Don’t sell below variable costs, but beyond that, price and cost are only related through competition and our self-confidence.

As a final word on burdening: If your bonding company, or insurance company, or government contract, or some other authority requires you to “burden” your report, or bid, or invoice - go ahead and do it.

Fill in the blanks with the numbers they ask for. You need the bond, have to follow bid specs, and you have to get paid.

Their burdening requirements do not mean that they are more sophisticated or knowledgeable than you are.

At best it means they need the information for some obscure internal purpose, but more likely it means they are as confused about burden as everyone else. Whatever the case, don’t let burdening confuse your ideas of cost and price or mess with your thinking or your ability to use margins and breakeven tools to make decisions.

Don’t participate in the burdening tomfoolery.

Charge all the market will bear for your products, know your variable costs, margins, fixed costs and breakeven numbers, and leave burdening to confuse your competitors.

Why Your Ads Don't Work

A Warning for Black Friday 2018

Why Should I Buy From You?